You pulled out your cast iron pan to bake some cake but founds some rusty spots on the baking surface of the pan. Now, you don’t know whether you should go ahead and cook with the rusty pan or look for another pan. Continue reading to find out what to do.

As a matter of fact, there’s no study that confirms that there are health issues involved when you cook with a rusty pan. This is probably because the cooking heat will kill off all the spores that may be in the rust. However, it is not advisable to take such risks. So, what should you do? Follow the steps below to remove the rust.

Is It Safe to Cook in a Rusty Cast Iron Pan?

No, it is not advisable. Actually, there’s no known health hazard involved because the bacteria spores on the rusty surface will get killed off during cooking. However, it is not advisable to take the unnecessary risk, especially when there are simple steps to remove the rust. Besides, rust could affect the taste or flavor of the food cooked or baked in a rusty pan.

Whenever you notice some rust spots on your cast iron pan, what to do is remove the rust before you cook with the pan.

What Do I Do If My Cast Iron Pan is Rusty?

At this point, you have two clear options. You can bake with another pan that is not rusty. And if you don’t have any other pan, you may have to remove the rust with a scouring pad before you cook with it. Baking or cooking with a rusty cast iron pan is not a safe option, even though there’s no clear health hazard involved.

Is Cast Iron Ruined if It Rust?

No. If the rust is mild, you can remove them with a scouring pad. But if the rust is serious, you’ll have to dip the cast iron pan inside the vinegar solution and leave it for 30 minutes to be able to remove the rust. Either way, your cast iron pan can be restored from rust.

How Much Rust is Too Much Cast Iron Pan?

If after leaving your rusty cast iron pan inside the vinegar solution for more than an hour, you don’t notice any improvement, you might have to discard the pan. It means that the rust is too much or too deep. You can’t know the depth of the rust with your eyes. The only way is to subject it to the vinegar solution test.

It takes about 24 hours to some days for rust to appear on cast iron if the condition is enabling. The question is, what causes rust? When you leave water or moisture on your cast iron pan for too long, it is likely to start rusting. The atmospheric oxygen will react with the water and set off the rust.

Even if you often wipe your pan dry after washing it, the pan may still get rusty because wiping a wet surface with a piece of cloth or towel does not remove all the moisture. The pan may be left with some moisture molecules that cannot be seen with ordinary eyes. So, after wiping moisture off your pan, you still need to heat it in your oven at low-medium heat for about 5 minutes. This is what will remove the remaining molecules of moisture.

How to Remove Rust from Cast Iron Pan with Salt?

Step 1 – Pour a tablespoon of table salt into the rusty pan.

Step 2 – Use a stiff brush, a non-scratch scouring pad, or any other mildly abrasive to scrub the pan. Concentrate on the rust spots. Scrub it thoroughly.

Step 3 – Rinse off the salt with cold water.

Step 4 – Dry the cast iron pan by wiping it with a paper towel. Of course, that won’t be enough.

Step 5 – You also need to heat the pan on your stovetop at medium-low heat for about 5 minutes. This will make the tiny, invisible molecules of water evaporate.

Step 6 – Apply seasoning oil to a soft piece of cloth or a paper towel. Use the towel to wipe the pan until the rust is no longer visible on the surface of the pan.

When you no longer see any visible rust, you can begin to cook with the pan. However, these steps may not work for serious rust. Check the steps below for deep and serious rust.

Step 1 – Mix a quarter bucket of water with the same quantity of vinegar.

Step 2 – Soak the rusty pan inside the vinegar solution for about 30 minutes. After that, you can bring it out. You should no longer see any rust by now. And if the rust is still visible, soak the pan in the vinegar for another 10 to 20 minutes. However, do not assume that the longer you leave the pan in the solution, the more it will clear the rust. You should never soak the pan longer the 2 hours. When the solution is through eliminating rust, it will start eating through the cast iron.

Step 3 – When the rust spots are no longer visible, you can rinse the solution off with cold, clean water.

Step 4 – Wipe the pan dry with a dry towel before you heat it on a stovetop at medium-low heat for about 5 minutes. And that’s all.

Yes, it does. In fact, Vinegar can remove serious, deep rust from cast iron pans. You only need to mix vinegar with the same quantity of water. Then soak the rusty pan in the solution for about 30 – 60 minutes. The solution will remove the rust and you’ll only rinse off the solution.

Yes, coke has the ability to remove rust from cast iron because it contains phosphoric acid. Pour some coke in a bath. Pour enough quantity to fully submerge the pan. Now, soak the pan inside coke for about 10 – 30 minutes, depending on how wide the rust is. You can bring out the pan every 10 minutes to check if the rust is gone. And if they are gone, you can rinse the pan, dry it with a towel, and heat it for 5 minutes before you start cooking with it.

Can a Rusty Cast Iron Pan Be Restored?

Yes. There are three simple methods to restore a rusty iron pan. You can use any of the three methods below.

How to Prevent Rust on a Cast Iron Pan?

First, you need to understand what causes rust. When you do, you’ll be able to prevent it. What causes rust is when you leave water on the surface of your pan for an extended period of time. So, to prevent rust, you need to quickly wipe your pan dry after washing it. After that, you should heat it on your stovetop or in your oven at medium-low heat for about 5 minutes. This step will make the water evaporate.

Can You Season a Rusty Cast Iron Pan?

Yes, it is possible to season a rusty cast iron pan, but it is not a good idea. You need to remove the rust with any of the methods discussed above before you season it.

When Should I Throw Away My Cast Iron Pan?

If you notice any of the following issues with your cast iron pan, you may have to dispose of it immediately.

Deep rust – When the rust on your pan is so deep that it cannot be removed with all the methods described above, you may have to throw the pan away.

Warping – This will make your pan distribute heat unevenly. That may lead to a situation where a part of your food will be done while another part is undercooked. So, when your cookware begins to warp, you can kiss it goodbye.

Cracks – When your pan cracks, there’s no solution for it because the crack will keep increasing as you heat it until it splits into two. So, when you notice a crack in your pan, start planning to replace it.

Is It Necessary to Take Tetanus Injection if Cut by Rusty Cast Iron?

Yes, this is necessary. This is because tetanus is often linked to rust. So, if you or anyone close to you gets cut by a rusty pan, you or the person should get a tetanus injection. Don’t stop at only treating the cut. 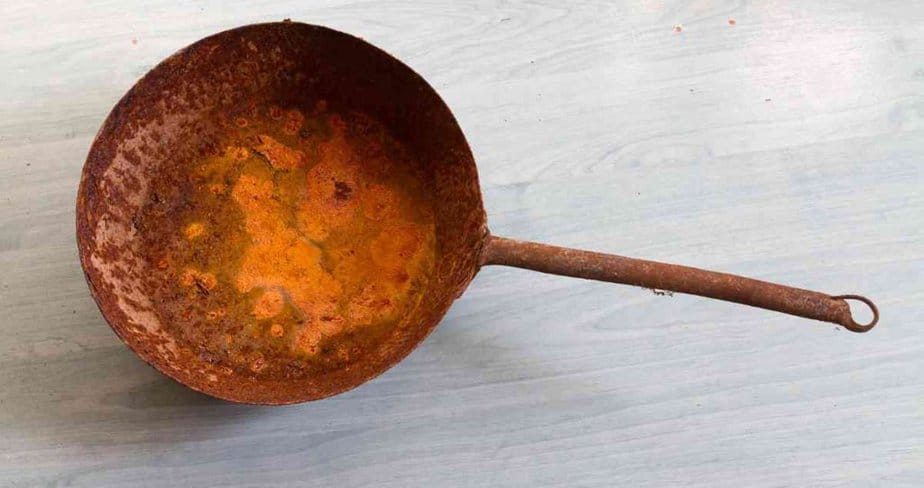 Here is your takeaway from the piece. When you notice that your cast iron pan has a few rust spots, adopt any of the methods above to remove the rust. Don’t cook with it until the rust is removed. And to prevent rust, don’t leave water on the surface of your pan for too long.